The Fylfot (meaning “four footed”) is Mankinds oldest and mightiest power symbol, known throughout the entire ancient world. Associated with fire and lightning, the Fylfot is particularly holy to Thor, and is a potent symbol of dynamic cosmic power, and unstoppable swirling strength of the will, invoking his protection. This motif occurs frequently throughout the lands of the wide ranging Teutons since the early Bronze Age and are prominent on cremation urns and carved memorial grave stones with early Runic inscriptions, seeking Thor’s protection in the afterlife.

An elder, continental version of the Germanic tree of life; Yggdrasil, the Irminsul is the cosmic axis of the world and the central pillar that binds the Heavens, Earth, and Underworld together, with the North Star is at its’ apex.

The name Irminsul is translated as “mighty Pillar”and is derived from “IRMIN” the ancient Saxon name for TIWAZ – ( TYR ). As such it represents a conduit to cosmic balance, order, personal power, spiritual creativity, growth, clear vision of ancestrial memory and other hidden knowlage.

Originating as a spiritual representation of the chariot wheel of the ancient Sun Goddess -SUNNA-, who traverses daily across the heavens, eternally pursued by a ravenous wolf. A variant of the Fylfot, the Sunwheel is one of the oldest spiritual symbols of the Teutonic peoples, invoking the vital life giving powers of fertility, peace and plenty from the divine fire of the heavens. 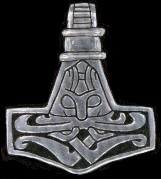 Thor is one of the most important and honoured of the ancient Germanic Gods, because of his power over the seasons. So popular is he that the fifth day of the week – Thursday, is held sacred to him and still bears his name (Thors’ Day). The hammer of Thor is one of the God’s most precious treasures, and is the greatest sign of the native Teutonic troth, known since the earliest times.

The hammer of Thor represent the life bringing fertility powers of the great cosmic phallus, and is the weapon with which Thor defends the Gods, Goddesses, mankind and their allies from the bringers of chaos and destruction, the Giants. As the son of Odin and the Earth Goddess Jord, Thor inherited the protective and destructive power of the Air, Wind and Storm, it is he who summons fair weather, the rains, lightning and thunder with his mighty hammer Mjolnir ( meaning “the crusher”), uniting the realms of heaven and earth bringing well being, vitality, balance, strength and other fertile, creative blessings to the Earth and his faithful.

Three triangles interlinked, symbolic of the universe in its 3 fold aspect. Meaning “Knot of the slain” or “Knot of the chosen”. The Valknot is a shamanic sign of the coming together of the powers from the 9 worlds of the Cosmic World Tree – YGGDRASIL. This is the symbol of Odin, showing his power to bind and loosen the minds of man, subtly affecting the knotted web of fate, he lays bonds upon them, so that they become helpless in battle, or he could loosen the grip of fear by his gifts of intoxicating battle-madness and divine inspiration. The Valknot should be worn only by those who dedicate themselves to the ways of the AllFather.