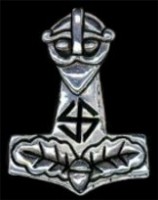 Thor is one of the most important and honoured of the ancient Germanic Gods, because of his power over the seasons. So popular is he that the fifth day of the week - Thursday, is held sacred to him and still bears his name (Thors' Day). The hammer of Thor is one of the God's most precious treasures, and is the greatest sign of the native Teutonic troth, known since the earliest times.

The hammer of Thor represent the life bringing fertility powers of the great cosmic phallus, and is the weapon with which Thor defends the Gods, Goddesses, mankind and their allies from the bringers of chaos and destruction, the Giants. As the son of Odin and the Earth Goddess Jord, Thor inherited the protective and destructive power of the Air, Wind and Storm, it is he who summons fair weather, the rains, lightning and thunder with his mighty hammer Mjolnir ( meaning "the crusher"), uniting the realms of heaven and earth bringing well being, vitality, balance, strength and other fertile, creative blessings to the Earth and his faithful.